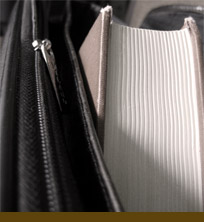 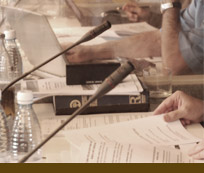 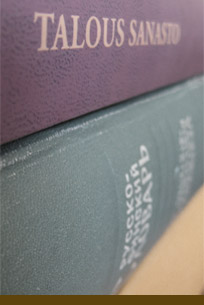 Conference interpreting occurs almost exclusively in simultaneous interpretation mode, where interpreters sit in a sound-proof booth, speak into a microphone and the audience listens to the interpreted speech via earphones.

Simultaneous interpretation is carried out by at least two interpreters, usually two per working language. They work in shifts of 20-30 minutes.

“Whispered” interpreting (known as “chuchotage” in French) is used in small groups or workshops. Normally, the interpreter works closely with a small target-language audience (usually, no more than two people) whilst “whispering” a simultaneous interpretation of the source message.

During group visits or delegations to work places, for instance, interpreters use a portable piece of equipment called a “bidule”, which allows “whispering” simultaneously into a microphone whilst the audience listens to interpretation via earphones.

We offer high quality translation services. All our translators are native speakers.

Our translation services are used by a wide-range of organisations, including cultural institutions, the tourist and hotel industry, local, regional and central government councils and administration, publicity agencies, the forestry industry and IT companies.